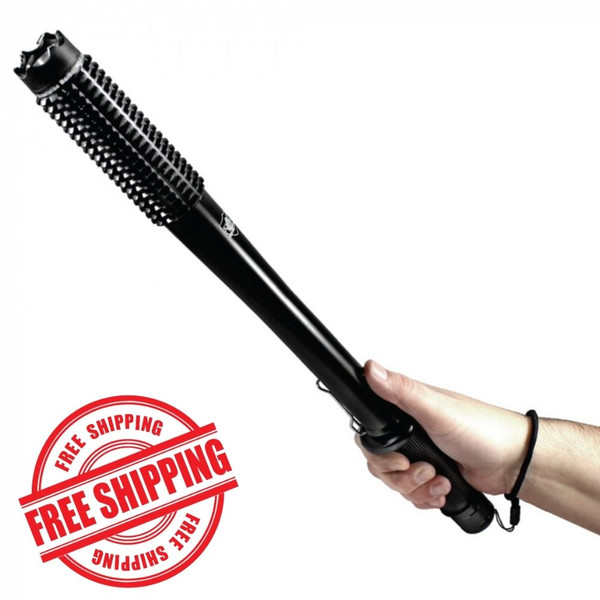 This is the delivered price. Shipping is FREE to any US address!

Bulk Pricing:
Buy in bulk and save

In ancient times barbarians were known for being uncivilized, brutal, and fierce warriors.

“The Barbarian” is the perfect name for our newest stun baton. If Conan the Barbarian lived in modern times we are sure this would be his weapon of choice. Even in our more refined culture there are still “barbarians” who roam the streets.  When you arm yourself with this savage looking stun baton with high-tech Triple Stun Technology, you will be prepared to easily take down any modern day barbarian foolish enough to attack you. We have combined a spiked baton with a powerful stun gun and blinding flashlight to create one of the most feared stun batons on the market today.

Whether you leave it on your night stand, in your car, or carry it with you on your belt with the metal clip, protecting yourself with the Barbarian is as easy as 1,2,3:

1. Identify the Threat: An attacker will use the cover of darkness to sneak up on their victims and to hide their identity. He'll also look for the most vulnerable victim. This powerful light beam shined in the direction of a possible attacker is often enough to persuade him to go in search of an easier target.

2. Disorient Attacker: Shining the ulta-bright light directly into someone's eyes will cause several seconds of impaired vision. The Streetwise Barbarian 9,000,000 Stun Baton Flashlight boasts a super bright light beam with Self Defense Strobe that can disorient your attacker and give you time to flee.

3. Strike or Stun! If these first two are not enough to deter your attacker, a blow from the metal baton or a shock from the powerful stun gun certainly will.

*Actual Voltage output is difficult to measure and verify, but this unit compares to other brands that claim to be 9,000,000 or more volts.